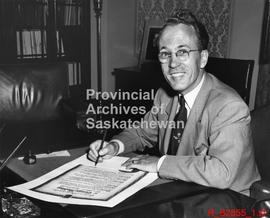 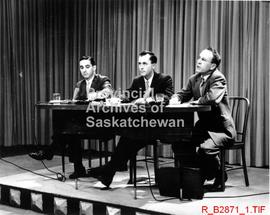 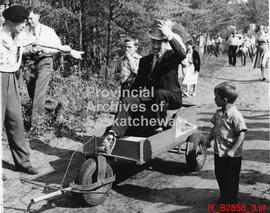 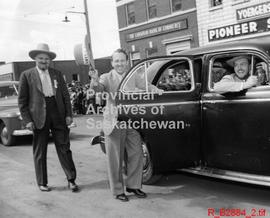 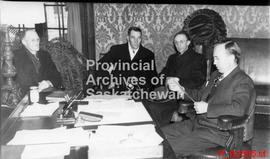 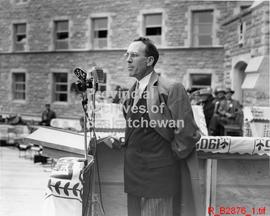 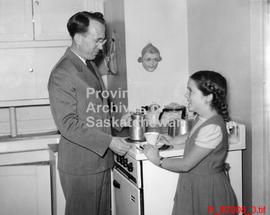 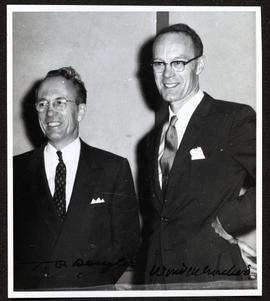 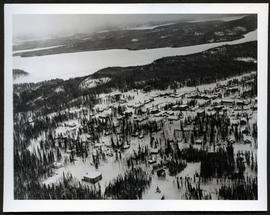 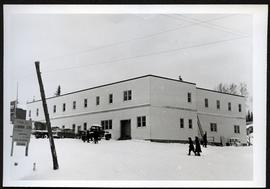 Thomas Clement (Tommy) Douglas was born in Falkirk, Scotland on October 20, 1904 to Thomas and Annie (Clement) Douglas. In 1910, he immigrated with his family to Winnipeg, Manitoba. Douglas attended elementary school in Winnipeg and continued his education in Glasgow, Scotland, where he and his family relocated during World War I. Upon moving back to Winnipeg in 1919, Douglas apprenticed in the printing trade and worked as a Linotype operator. In 1924, he enrolled at Brandon College to pursue his ambition to become an ordained minister. He graduated with a Bachelor of Arts degree in 1930 and was ordained a Baptist minister in Weyburn. During the summer of 1931, Douglas studied sociology at the University of Chicago but never completed his doctoral thesis. Douglas earned a Master of Arts degree from McMaster University by correspondence in 1933 while serving at Calvary Baptist Church in Weyburn.

Douglas's political career began in the early 1930s, when he helped establish the Co-operative Commonwealth Federation (CCF). After running unsuccessfully as a Farmer-Labour Party candidate in the 1934 Saskatchewan general election, Douglas was elected to the House of Commons in 1935 and served as the CCF Member for the Weyburn constituency until 1944. In 1941, he was elected president of the Saskatchewan CCF and became the party's leader in 1942. On June 1, 1944, Douglas resigned from the House of Commons to run in the Saskatchewan general election. On June 15, 1944, the CCF was elected into power, becoming the first democratic socialist government in North America. Douglas became the CCF Member for Weyburn, the seventh premier of Saskatchewan and the president of the Executive Council. While premier, Douglas also served as Minister of Public Health (1944-1949) and Minister of Co-operation and Co-operative Development (1949-1960).

Premier Douglas and his government introduced many innovative social and economic reforms. The Crown Corporations Act created numerous publicly-owned agencies, including the Saskatchewan Transportation Company (a provincial bus line), the Saskatchewan Power Corporation (which extended electrical service to isolated rural areas), and the Saskatchewan Government Insurance Office (Canada's first publicly-owned automotive insurance service). During his tenure, The Saskatchewan Bill of Rights was passed and legislation allowing for the unionization of the public service was brought in. A program offering free hospital care to all citizens was also introduced. As well, Douglas's government introduced universal health care legislation in 1961, although the resulting Medicare program was launched by Douglas's successor, Woodrow Lloyd, in 1962.

In November 1961, Douglas resigned from provincial politics to become leader of the newly-created New Democratic Party (NDP), an amalgamation of the CCF and Canadian Labour Congress. Douglas ran in the Regina City riding in the 1962 federal election but was defeated. Later that year, he was elected to the House of Commons in a by-election in the riding of Burnaby-Coquitlam. Douglas remained in that seat until his defeat in the 1968 federal election. He was elected in a 1969 by-election in the riding of Nanaimo-Cowichan-The Islands. In 1971, Douglas resigned as NDP leader but remained in his seat in the House of Commons and served as the NDP energy critic until his retirement from political life in 1979. Douglas died in Ottawa on February 24, 1986.

Douglas received numerous awards and honours, including: the Saskatchewan Order of Merit (1985); a Companion of the Order of Canada (1981); membership in the Queen's Privy Council for Canada (1984); and induction into the Canadian Medical Hall of Fame (1998). Douglas also received numerous honorary degrees from Canadian universities. Douglas Provincial Park in Saskatchewan was named in his honor. In 2010, a statue of him was erected in Weyburn.

Douglas married Irma Dempsey in 1930. They had two daughters: Shirley and Joan.

Thomas Kunito (Tommy) Shoyama was born on September 24, 1916, in Kamloops, British Columbia. He earned Bachelor of Arts in Economics and Bachelor of Commerce degrees from the University of British Columbia in 1938. From 1939 to 1945, Shoyama served as editor of the New Canadian, a civil rights newspaper for Japanese-Canadians. In 1946, he worked briefly as a journalist for the Intelligence Corps of the Canadian Army before he moved to Regina, Saskatchewan, to work for the Government of Saskatchewan.

During his tenure with the Government of Saskatchewan, Shoyama was first hired as a research economist. In 1950, he was appointed as secretary to the Economic Advisory and Planning Board. He also served as economic advisor to Premier T.C. Douglas (1950-1961) and Premier W.S. Lloyd (1961-1964).

In 1964, Shoyama moved to Ottawa and became a senior research economist with the Economic Council of Canada. Within the federal government, his appointments included: Assistant Deputy Minister of Finance (1968), Assistant Deputy Minister of Energy, Mines and Resources (1974), and Deputy Minister of Finance (1975). He retired from the federal civil service in 1979 and soon after was appointed as advisor to the Privy Council on economic aspects of the Constitution. In 1980, he became a visiting professor at the University of Victoria in its School of Public Administration and its Centre for Pacific and Oriental Studies.

Awards and honours received by Shoyama included: Officer of the Order of Canada (1978); the Outstanding Achievement Award in the Public Service of Canada (1982); the Vanier Medal from the Institute of Public Administration of Canada (1982); honourary degrees from the University of British Columbia (1984) and University of Victoria (1999); and the Order of the Sacred Treasure from the Government of Japan (1992). The Pearson-Shoyama Institute in Ottawa was partly named in Shoyama's honour. As well, the Johnson-Shoyama Graduate School of Public Policy, established at the University of Regina in 2007, was partly named in Shoyama's honour.

The fonds does not include records of Douglas as Leader of the Commonwealth Co-operative Federation (1942-1944) and Member of the Legislative Assembly for Weyburn (1944-1961).

The fonds also consists of copies of: Douglas' Master of Arts thesis from McMaster University, entitled "The Problem of the Subnormal Family", dated March 1933; a filing key for records created by Douglas as Premier of Saskatchewan; correspondence written in 1971 by Douglas to Donald C. Gunn; and oral history interviews conducted in 1981 and 1982 with Douglas relating to his political career.

The factors determining the arrangement of records in this fonds have not been documented during the description process.

SAFA 626 (old guide GR 90) consists of a fonds description and file listings of the textual records. Item descriptions of the photographs are available in Threshold.

Associated material: Tommy Douglas fonds - Held by Library and Archives Canada. Includes records created, accumulated and used by Douglas between 1944 and 1961 as Premier of Saskatchewan. See CAIN No. 269130. (See Saskatchewan Archives record R-E1465 for a guide to these records.)
Related material: GR 10 Checklist of Records of Executive Council - includes records of Douglas as Premier of Saskatchewan and President of the Executive Council.
GR 330 An Inventory of the Audio Recordings of Thomas Clement Douglas - an artificial collection of recordings relating to Douglas.
Additional textual, photographic, audio and video records related to T.C. Douglas are available. Please consult the Regina and Saskatoon main card catalogues, audio and video card catalogues and Threshold for descriptions of these records.

Status of records review:
Access to records restricted. Records review conclusion based on information about the accession, fonds, series, or collection.