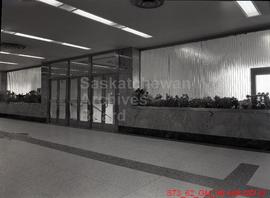 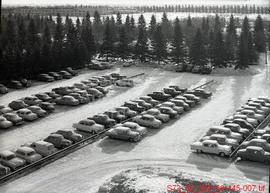 Parking lot on south side of Administration Building. Photograph taken from the roof of building.

Unedited footage of American mystery novelist Carol Higgins Clark at Government House in Regina. Clark is toured through various rooms in Government House by an unidentified male guide who talks about "Howie", the ghost of Government House, and tells her more stories of paranormal activity in the building and shows her various artifacts, including the pool table and rocking horse in the nursery.

Report prepared by the City of Regina's City Planning Department regarding the site evaluation for a new city hall in Regina, Saskatchewan.

Images of the construction of the Provincial Office Building (also known as the T.C. Douglas Building) in Wascana Centre, Regina, Saskatchewan from July, 1975 to October,1977. Most of the images were taken by the Government of Saskatchewan Photographic Services agency. Two of the images have Arnott, MacPhail, Johnstone & Associates Ltd. stickers on the back with reference to project number 7330/GS0446.

Programme and invitation issued by the Historic Sites and Monuments Board of Canada relating to the commemoration of Government House in Regina on September 11, 1991.

Invitation issued by Saskatchewan Culture and Youth to a reception for the National Historic Sites and Monuments Board of Canada on June 18, 1982 at Government House Historic Property, Regina. Includes sketch of Government House by McAnsh.

Pamphlet on Government House Historic Property issued by Saskatchewan Parks, Recreation and Culture [1984 or after].

Leaflet dated ca. 1996 containing information on Stephens Tapestry, which was exhibited at Government House in Regina.