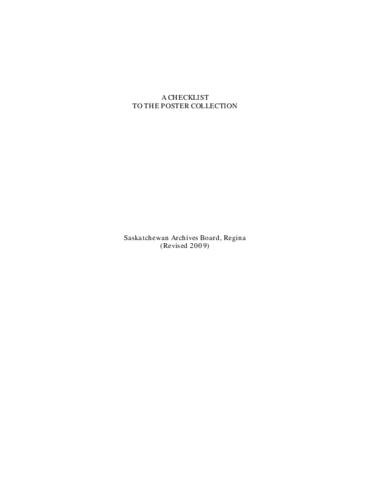 Patricia Atkinson was born on September 27, 1952 in Biggar, Saskatchewan to Robert Roy and Betty Atkinson. She attended Walter Murray Collegiate in Saskatoon and earned Bachelor of Arts (Honours) and Education degrees from the University of Saskatchewan. Atkinson worked as a teacher, union organizer and principal until 1986, when she was first elected to the Saskatchewan Legislature. She served as the New Democratic Party Member of the Legislative Assembly (MLA) for Saskatoon Nutana (1986-1991, 1995 - ) and Saskatoon Broadway (1991-1995) constituencies.

From 2007 to 2011, Atkinson served as MLA for Saskatoon Nutana and was Deputy Leader of the Opposition and Opposition Critic for Education. In January 2011, she announced her retirement from politics and served in the Legislative Assembly until May 2011. Currently (2011) she continues to reside in Saskatoon.

Cline articled in Saskatoon and was called to the Saskatchewan Bar in 1980. He worked as a legal research officer with the Law Reform Commission of Saskatchewan (1981-1982) and practiced law in Saskatoon from 1982 to 1995. Cline was involved with numerous community and professional organizations, including the Saskatoon Bar Association, the Canadian Bar Association, the Advisory Council on the Status of Women, and Saskatoon's 25th Street Theatre.

Cline's involvement in provincial politics began in 1975, when he ran unsuccessfully in the general election as the New Democratic Party (NDP) candidate in the Regina South constituency. Cline served as president of the Saskatchewan Young New Democrats in 1975 and 1976 and was active in provincial and federal election campaigns. He was first elected to the Saskatchewan Legislature in 1991 and served as a NDP Member of the Legislative Assembly (MLA) for the Saskatoon Idylwyld (1991-1995); Saskatoon Mount Royal (1995-2003); and Saskatoon Massey Place (2003-2007) constituencies until his retirement from politics in 2007.

Cline served in the Roy Romanow and Lorne Calvert Governments as Minister of Health (1995-1997); Minister of Finance (1997-2003); Minister of Justice and Attorney General (2003); and Minister of Industry and Resources (2003-2007). He was also Minister Responsible for numerous agencies, boards and commissions.

Cline is currently (2009) Vice-President, Corporate Affairs with Shore Gold Inc., a mineral exploration and development corporation based in Saskatoon.

Prior to entering provincial politics, Goulet worked as an elementary school teacher, sessional lecturer at the University of Saskatchewan and Cree language consultant. He was also a Northern Teacher Education Program (NORTEP) developer, principal of La Ronge Community College and executive director of the Gabriel Dumont Institute of Metis Studies and Applied Research.

Goulet retired from Cabinet on October 12, 2001 and vacated his seat in the Legislature in 2003. Joan Beatty (NDP) became MLA for Cumberland constituency on November 5, 2003.

Goulet married Linda May Hemingway on August 31, 1974. They have two children: Koonu and Danis.

Judy Junor was born in 1949 in North Battleford, Saskatchewan and raised in Saskatoon. She received a Nursing Diploma from St. Paul's School of Nursing, Saskatoon, in 1969.

Junor was first elected to the Saskatchewan Legislature in the June 24, 1998 by-election as the New Democratic Party MLA for the Saskatoon Eastview constituency. She was re-elected in 1999 and 2003. Junor served in the Roy Romanow and Lorne Calvert Cabinets as Associate Minister of Health (1998-2001); Provincial Secretary (2001-2002); Minister of Learning (2003).

From 2007 to 2011, Junor continued to serve as MLA for Saskatoon Eastview. She also served as NDP Caucus Chair and as Opposition Critic for Health and Seniors. Junor was defeated in the 2011 general election. Junor continues (2011) to reside in Saskatoon.

Judy Junor is married to Don Junor, a small business owner. They have two children: Sean and Heather.

Clay J. Serby was born on February 15, 1950 in Theodore, Saskatchewan to John and Sophie Serby. He was raised on the family farm, which he currently owns and operates with his brother. Serby holds a certificate in Social Work.

Prior to entering politics, Serby worked as a social worker in Prince Albert and Yorkton. He served as alderman in Yorkton from 1986 to 1991 and was Executive Director of the Society for the Involvement of Good Neighbours in Yorkton from 1980 to 1991.

Serby was first elected to the Saskatchewan Legislature in 1991 as the New Democratic Party MLA for the Yorkton Constituency. He was re-elected in 1995, 1999 and 2003.

Serby announced that he would not seek re-election on September 7, 2007 due to health reasons. He acted as co-chair for the NDP's 2007 election campaign. Serby continues (2009) to reside in the Yorkton area.

Born in the Vonda-Alvena area of Saskatchewan on April 22, 1943, Edwin Laurence Tchorzewski attended rural schools at Fosston, Kelvington and Hudson Bay. He graduated from Hudson Bay Comprehensive High School and the University of Saskatchewan with a Bachelor of Arts degree in Political Science/History and a Teachers Certificate (1969).

Tchorzewski taught at St. Augustine's Separate School in Humboldt from 1965 until entering political life in 1971. Growing up in a Cooperative Commonwealth Federation (CCF) household, Tchorzewski became involved in party politics while at university. First elected to the Saskatchewan Legislative Assembly at the age of twenty-eight in the General Election of June 1971 as the New Democratic Party (NDP) member for Humboldt constituency, Tchorzewski served as a MLA until defeated in the 1982 General Election. Re-elected in 1985 in a by-election for the constituency of Regina North East, he continued to represent this area and Regina Dewdney constituency following the General Elections of 1986, 1991, and 1995.

Following his resignation Tchorzewski worked as a consultant for Rawlco Communications, and as an advisor to the Lorne Calvert government. In January, 2005 he became provincial secretary and chief executive officer for the Saskatchewan New Democratic Party.

In private pursuits Tchorzewski played and coached various sports, held an active role in church activities with the Knights of Columbus, and maintained his interest in education as a member of the Saskatchewan Teachers' Federation.

Carol Teichrob was born in Saskatchewan on August 27, 1939 to J. Delbert and Elizabeth Sproxton. Educated at Notre Dame High School and the University of Saskatchewan, Teichrob trained as a court reporter.

Entering political life in the October 1991 General Election, Teichrob ran successfully for the New Democratic Party in Saskatoon River Heights. She was re-elected in June 1995 in the Saskatoon Meewasin constituency.

Teichrob has had a varied business career working as a truck driver, court reporter, and farmer. She served as reeve of the Rural Municipality of Corman Park from 1981-1991. Teichrob co-founded Primrose Books Inc. in 1988, and was a partner in Amberlea Farm Ltd. and Moonvale Farms. She received the YWCA Saskatoon Woman of the Year Award (Business) in 1981, and the Saskatoon Rotary Club Golden Wheel Award for Excellence in Business and Industry in 1990.

Arrangement reflects both original order and archival intervention. Extensive portions of records belonging to the Education and Health portfolios had no discernable order.

Use, publication and/or reproduction of records may be subject to terms of an agreement with the donor.

Location for retrieval: Regina - Hillsdale; Regina - Maxwell
Some of the non-textual material has been retained in the textual records to preserve context.

Content of fonds.
File lists for portions of the records only.