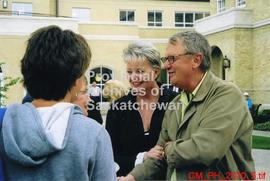 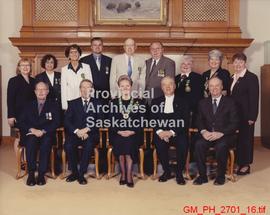 Lynda Maureen Haverstock was born on September 16, 1948 in Swift Current, Saskatchewan to Thomas Edward Ham and O'Nita (McCaskill) Ham. Haverstock completed her primary education in Swift Current and completed Grades 11 and 12 as an adult. She later attended the University of Saskatchewan, where she completed Bachelor of Education (1972), Master of Education (1977), and Doctor of Philosophy (1985) degrees.

From 1972 to 1980, Haverstock worked as a special needs educator and consultant in Saskatoon. She was registered as a psychologist in Saskatchewan in 1987. From 1986 to 1989, she was employed as a psychologist with the Saskatoon Mental Health Clinic and was a sessional lecturer at the University of Saskatchewan. Haverstock was also employed as a research associate with the Centre for Agricultural Medicine in Saskatoon specializing in farm stress. Haverstock served on numerous professional committees, established various programs, delivered hundreds of seminars and workshops and contributed to numerous publications.

Active in the Liberal Party in the 1980s, Haverstock's political career began in April 1989 when she was elected leader of the Saskatchewan Liberal Party. She was the first woman elected leader of a political party in Saskatchewan. Haverstock served as a Liberal Member of the Legislative Assembly of Saskatchewan (MLA) for the Saskatoon Greystone constituency from 1991 to 1995. Haverstock served as Leader of the Official Opposition from June 22, 1995 until November 12, 1995, when she resigned as leader. She remained as an independent MLA for Saskatoon Greystone until her retirement from provincial politics in 1999. During her legislative service, Haverstock was a member of the Standing Committees of Public Accounts, Crown Corporations, Board of Internal Economy, Rules and Procedures and Constitutional Affairs.

In May 2007, Haverstock was appointed president and CEO of Tourism Saskatchewan and served in that position until 2012. In October 2012, Haverstock became senior vice-president, special projects, with RMD Engineering Inc. in Saskatoon. Haverstock continues (2014) to reside in Saskatoon.

Haverstock is the recipient of numerous honours and awards, including the Order of Canada; the Saskatchewan Order of Merit; the Chancellor's Community Recognition Award from Royal Roads University; and the Distinguished Canadian Award. She has been awarded honorary doctorate degrees from universities across Canada and was named one of the University of Saskatchewan's 100 Alumni of Influence.

Haverstock has one daughter and numerous grandchildren. She married Harley Olsen in 1991.

These records are subject to access restrictions and the conditions of the Copyright Act. Please consult reference archivist for assistance.

SAFA 657 consists of a fonds description and box listings of textual records, moving images and sound recordings. Item descriptions of some of the photographs are available in Threshold.

Location for retrieval: Regina - Henderson
Some of the photographs were retained in the textual records and were not described at the item level.
The fonds includes photographs in print and negative format that were received loose and did not have any or all accompanying information, such as date or geographical location. These photographs are located in Box 44.
Some electronic copies are available in Archival Digital Storage. Please consult reference archivist.