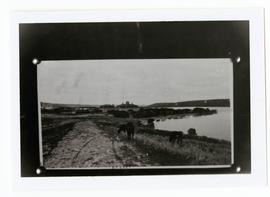 View of the Qu'Appelle Indian Industrial School taken from the road

Item is an image showing a view of the Qu'Appelle Indian Industrial School taken from the road. 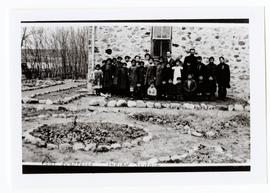 Students and teachers outside the Qu'Appelle Indian School

Item is an image of students and teachers posing for a photo just outside the Qu'Appelle Indian School. 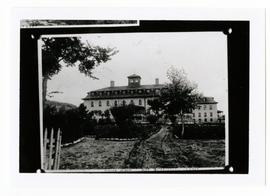 Item is an image showing a close-up view of the Qu'Appelle Indian Industrial School.

(2): Reverend H. Ellis, principal of the Onion Lake Indian Industrial School, standing next to an automobile parked in a field.

This fonds consists of records created, accumulated and used mainly by the secretary of the Saskatchewan Historical Society during its operation in Regina, Saskatchewan. The fonds contains the administrative records of the Society along with the records relating to the history of the province from the mid 19th century to 1945 compiled and collected by the Society in fulfillment of its mandate.

See SHS 97 for a letter regarding the massacre of Blackfoot and Blood Indians by Crees (Red Ochre Hills massacre) and an article by C. Wetton regarding Fine Day, Cree warrior. See SHS 94 for a letter and note regarding a table in the Saskatchewan Legislative Library known as the confederation table. See SHS 129 for correspondence regarding Indians serving in World War II and an Indian gathering on Assiniboin Reserve, September 9, 1941, to dedicate themselves to war services, enfranchisement of Indians, etc. See SHS 159 for document written by Neil Brodie entitled Twelve Days with the Indians, May 14 to May 26, 1885, regarding his experiences in Poundmaker's camp during the rebellion of 1885. See SHS 150 for the 1935 report of the Royal Commission on the Natural Resources of Saskatchewan.

Ration books (Series 1 and 6) issued by the Canada Wartime Prices and Trade Board to Jos. (or Jas.) I. Hodgins and R. Knowles Hodgins of Estevan, Saskatchewan.

Dominion of Canada Registration Certificate issued on August 19, 1940 to Rebecca K. Hodgins of Cabri, Saskatchewan under the provisions of the National Registration Regulations, 1940.

Item component is an article by that appears in volume 6, issue 2 of Saskatchewan History from page 66 to 69.