Correspondence and memoranda relating to a variety of topics which include co-operatives, credit unions, homes for the handicapped, Regina and Saskatoon associations for the mentally retarded, United Church of Canada; diary of Gavin Middleton of Carnduff, Saskatchewan, 1882-1884; Sixty Years of CGIT, 1915-1975; correspondence regarding Grace Lane's book, Sturdy Strands of Faith; photographs; and an undated map of Moose Jaw, Saskatchewan issued by the Moose Jaw Chamber of Commerce showing streets and points of interest, etc. 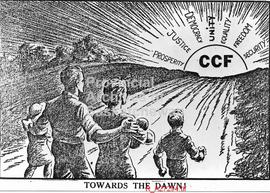 Item is an illustration from the CCF pamphlet "Towards the Dawn!" Image shows a man, woman and three children travelling on a road towards a sun emerging from the horizon with rays of light consisting of terms such as prosperity, justice, democracy, freedom, security, and unity.

Possibly an agricultural tour of Russia by members of the C.C.F.

Possibly an agricultural tour of Russia by members of the C.C.F.. 1930's.

Scenes possibly taken in Italy by a tour of C.C.F. members

Scenes possibly taken in Italy by a tour of C.C.F. members.

Newspaper clippings. Includes clippings relating to the Progressive Conservative Party at the national and provincial level and freedom of the press.

Records relating to the history of Weyburn, Saskatchewan; programmes and bulletins relating to activities at Metropolitan United Church, Regina, 1939-1944; clippings re Earlswood Cemetery and re Jim Rollefson; letters from Peter Gzowski and Ed Broadbent; biographical materials re the Elliott Robins family; United Church (Regina Presbytery) Homes for the Handicapped minutes, June 4, 1984 and April 15, 1985. 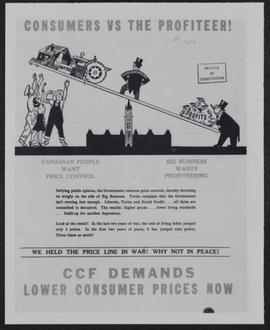 Consumers vs the Profiteer!

Item is a reproduction of the cover of the political pamphlet: Consumers vs the Profiteer! CCF demands lower consumer prices now. Cover depicts government standing in the centre of a lever with big business on one side grasping bags of money, people reaching for consumer goods on the other side, and with the Peace Tower of the parliament buildings acting as a fulcrum.