A man on a plough drawn by horses on the Eugène Gervais farm near Alida. 1926.

A monument of a soldier and horse

Item is an image showing a monument dedicated to Canadian participation in the Boer War. Located in Montreal at the corner of Ste-Catherine and Metcalfe (Dorcester Square), the monument is nine metres high topped with a life-size bronze statue of a rearing horse and a cavalryman leading it by the reins while holding a pair of binoculars (indicating his role as a pathfinder) in the other hand. A rolled up blanket is shown attached to the horse's saddle. The lower part of the monument resembles a typical cenotaph and includes at the four corners inscriptions of the names of the Canadian regiments that participated in the conflict. Image shows the west side of the monument that is inscribed "To commemorate the heroic devotion of the Canadians who fell in the South African war and the valour of their comrades.” West side also includes a relief depicting the Battle of Paardeberg, where Boers surrendered to Canadian infantry.

Item is an image showing a row of five horse-drawn binders at work at the Haygart & Sons farm in the Alameda district. Men are identified. 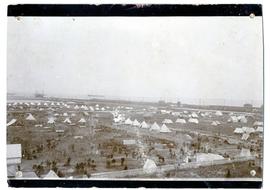 Item is a photograph showing an elevated view of an unidentified American military camp - tents, horses, wagons, and train cars are visible with ships in the distance. 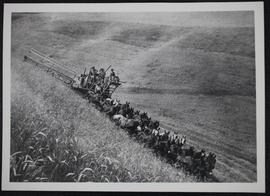 Best sidehill harvester in operation on hillside in Washington state, pulled by many horses

Item is an image showing a [Daniel] Best sidehill harvester in operation on a hillside in Washington state. The harvester is pulled by a large number of horses. Photograph taken in 1890s or early 1900s. 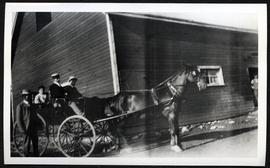 Carriage specially built for John Cherry of Yorkton, by McLoughlin of Oshawa

Item is an image showing a horse-drawn carriage that was specially built for John Cherry of Yorkton, by McLoughlin of Oshawa. John Cherry and his son Lawrence are seated in carriage.
.

Cutting wheat in the Zelma area

Items are image showing threshing machines and straw blowing onto haystacks with steam tractors and horses in us; images include numerous unidentified labourers at work.