"Those Were The Days" in Swift Current

"Those Were The Days" in Swift Current, by Jim Greenblat. Publication issued to commemorate Saskatchewan Homecoming '71. Consists of a series of weekly columns written by Jim Greenblat that were originally published in the Swift Current Sun in 1969. The columns contain Greenblat's reminiscences of Swift Current and district and various residents from approximately 1910 to 1960.

A History of the Nelson Family

History of the Nelson family written by Connie Erickson.

A Homestead Pioneer of the 1930's: The Anna Soroka Story

Second printing of a publication written by Anna Soroka of Nanaimo, British Columbia. Foreword written by Alex Kobelak. The Soroka family homesteaded in the McElhanney, Saskatchewan district in the 1930s.

A Homestead on the Prairie

Article entitled, A Homestead on the Prairies, written by Frank A. McGill and published in the February 2, 1950 edition of The Western Producer Magazine, McGill reminisces about homesteading land located southwest of Elbow, Saskatchewan, ca. 1910.

A Mother Braving A Wilderness

Publication entitled, A Mother Braving A Wilderness, written by Otto Lutz. Recollections by Lutz of experiences shared with his widowed mother, Theresia (Zuern) Lutz of emigrating from Nebraska to Rosthern, North-West Territories in 1902 and their subsequent homesteading at St. Peter's Colony near Muenster. Published by the St. Peter's Colony Jubilee Steering Committee.

A couple of men and women and two girls outside a frame house with a front veranda. Opened gate and picket fence in foreground. Winter. Prince Albert(?)

A family beside their plaster-covered house in Prince Albert district

A family beside their plaster-covered house in Prince Albert district.

A group of people outside the Drake church, a small wooden building

A group of people outside the Drake church, a small wooden building. 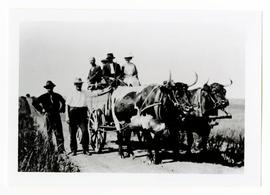 Item is an image showing a group of settlers in and beside a wagon pulled by two oxen. Taken west of Amazon, Saskatchewan.