2020 Heritage Book relating to the 39th Danish Canadian Conference, postponed to a later date due to the Covid-19 Pandemic, issued by the Federation of Danish Associations in Canada. The illustrated publication includes articles, biographies, photographs and advertisements. Includes an article written by Rolf B. Christensen on Otto Valdemar Andreasen, who built Humboldt Creamery, the first private dairy in Saskatchewan.

Souvenir Programme for the 100th Anniversary of the establishment of the Order of the Sisters of St. Elizabeth in Humboldt, Saskatchewan

Two copies of souvenir programme for the 100th anniversary of the establishment of the Order of the Sisters of St. Elizabeth in Humboldt, Saskatchewan and the St. Peter's Abbacy in 1911, hosted by the Parish of St. Augustine, Humboldt. The programme includes a photograph of the exterior of St. Elizabeth's Hospital and a brief history of the Order's involvement in the hospital.

The Humboldt Journal was established in 1905 by Robert Telfer (publishing its first issue October 19, 1905); his brother William joined him in the business in 1907. William retired from the business in 1942 and Robert's son Walter became editor in 1946. Alice Telfer published the paper following her husband Robert's death in 1953 until her passing in 1956. Walter then assumed the position of publisher at this time and Walter's son Don entered the business in 1967. The Journal continued to be a family run business until 1988 when Prairie Publishing Ltd. bought into the paper. The Telfers remained partners in the paper until 1994 when Don Telfer sold his shares.

Collection consists of issues for East Central Trader from 2009.

Reunion 2000: A Tribute to the Sisters of St. Elizabeth 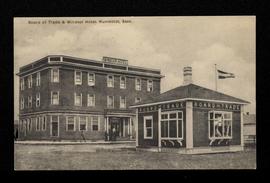 Board of Trade building and the Windsor Hotel in Humboldt

Board of Trade building and the Windsor Hotel in Humboldt. 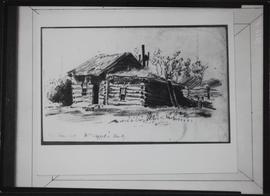 Mrs. Leggat's shanty at Humboldt, from a sketch

Mrs. Leggat's shanty at Humboldt, from a sketch. 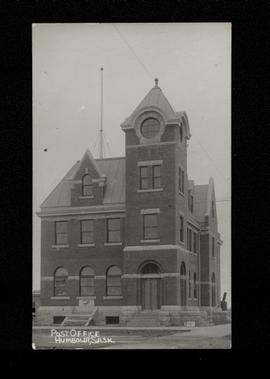