Photographs of members of the Lawrence Topham family in 1917 gathered in front of the homestead farm home, three miles north of Togo; exterior and interior views of the Craig Brothers General Store in Togo, Saskatchewan, including members of the Craig family; and other views of Togo, originally named Pelly Siding, ca. 1904, 1922 and 1930.

Item is an image showing a turkey flock / rafter and buildings located on the farm of John Andersen west of Manor, Saskatchewan.

Farmstead near Vegreville in the winter

Item is an image showing Hoskin Amy breaking land with six oxen in the Watrous district of Saskatchewan.

Item is an original photograph showing a group of field workers having lunch in the M.J. Hjertaas farm near Wauchope, Saskatchewan in the spring of 1942.

Item is an image showing Doukhobors cutting hay with scythes (7 men in row) from about 1900. 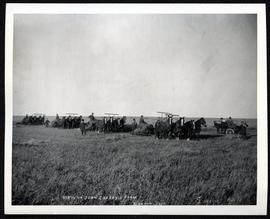 Item is an image showing a scene on John Cherry's farm located about 6 miles (or 9.7 km) east of Yorkton, Saskatchewan. The image shows a line of four (4) Frost & Wood no. 3 binders being pulled by 4-horse teams and on the right side of the image a Regal car, dog, and Lawrence Cherry on the shoulder of his father. 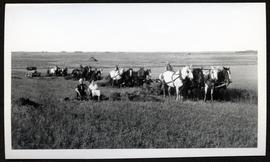 Frost & Wood no. 3 binders (4 in row) pulled by 4-horse teams on John Cherry farm near Yorkton

Item is a photograph showing a line of four (4) Frost & Wood no. 3 binders being pulled by 4-horse teams on John Cherry farm that is located 6 miles (ca. 9.7 km) east of Yorkton, Saskatchewan. In the foreground are Mr. and Mrs. Cherry while a wide expanse of fields is visible in the background.