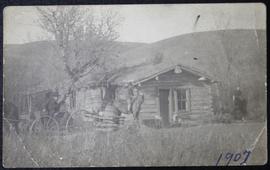 Log and plaster house belonging to the Mabons in the Tullisville district, water barrel beside it, two men on horseback, and man in buggy drawn by a horse. 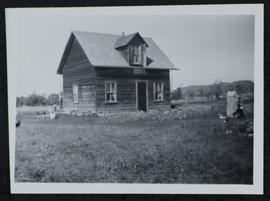 A two-storey frame house on prairie, an unidentified woman stands near. 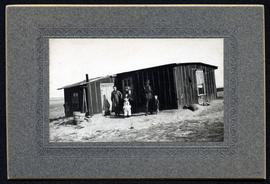 Exterior view of tar-paper covered shack on prairie. Family of five at door.

Men at a lumber camp near Prince Albert

A few men outside a tent, holding cups and plates; three men inside a tent beside a stove and a long table set for dinner inside a tent. Possibly a lumber camp near Prince Albert. Homesteaders with oxen and plough used to plough fireguard on prairie

Homesteaders, George and Arthur Jones with oxen and plough used to plough fireguard on prairie. Oxen lying down.

Two men seen gathering buffalo chips for fuel. One of the men is leading the horse which is pulling a Red River cart while the other man is picking up the chips with a pitch fork and loading them onto the cart.