Documentary: Follows the activities of a farm family through one of their days. The children collect a day's worth of wood for the house, from the wood pile. The cattle are fed and the farmer loads the horse drawn grain cart with 2 tons of wheat and takes it to the local grain elevator. The children are shown playing outside at the local one room school house. The farmer goes to the local town and stops to pick up mail from the post office located in the store. The chidren are let out of school at the end of the day. After delivering the grain to the elevator the farmer starts for home and encounters a snow storm but makes it home safely. Includes good shots of a snow storm, the interior of a grain elevator, children at a one room school house, a man walking with snowshoes, and a propeller driven snowplane. Cue cards are used through out the film to describe various scenes. CAUTION: THIS FILM IS BADLY SHRUNKEN - DO NOT PROJECT !!!!

News Clips: 1) New Democratic Party (NDP) and Progressive Conservative (PC) youth conventions; 2) Flu cases up this year; 3) Schools that have been closed and still used by the public, and Sask Housing is proposing to convert some of them into senior housing; 4) Women's group show up at the legislature to present a list of demands; 5) Squash; 6) Meeting dealing with relations between natives and the Regina school board; 7) People are upset that Connaught School is using a cowboy for its mascot; 8) Notre Dame Hounds hockey team; 9) New Horizon grant for seniors to make their own television show; 10) Preview of city council meeting including tax breaks for heritage buildings, rent association, and Taylor Field; 11) The city of Saskatoon has a surplus of money; 12) & 13) Speech by peace activist Dr. Helen Caldicott; 14) Enrolment is up at the University of Regina and there is not enough money for lab equipment etc.; 15) Lorne Hepworth speech at a SARM convention; 16) Shragge's Journal promo; 17) Access to Saskatchewan adoption files; 18) Food prices survey in Regina; 19) Native day care trainees; 20) & 21) Highlights of a Moose Jaw Canucks, Lloydminster Lancers hockey game; 22) Report on all terrain vehicles (ATV) and their danger; 23) Family service act is being overhauled; 24) Native day care trainees.

View of Tipperary School. Power line in foreground with snow covered field in the background. The school was located in the Balcarres, Saskatchewan district.

Item is an image showing the exterior of Sherman School, a small frame building. The school was located in the Admiral, Saskatchewan district. 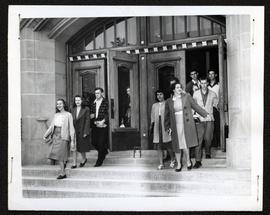