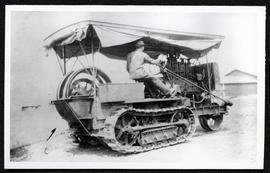 Letter from Mrs. Earla Burton to the Department of Natural Resources, requesting that her son, Earl Allan Burton, 1918-1943, have a Saskatchewan lake named after him as a tribute to a soldier who died in World War II, July 6, 1957. 2 p.

Article called "William Cousins of Medicine Hat: Crackerbox Bill Save the Day for Him in 1883". It is about William Cousins, b. 1856, celebrating his 80th birthday, source unknown, [1936?]. 1 p. Cousins was a Medicine Hat merchant, mayor and publisher.

Funeral annoucement for Judge Algernon Doak, 1876-1963, who was an early pioneer in Prince Albert, Leader-Post, Regina.

Copy of letters from Mrs. H.C. Atton of Gallivan, Sask. to the Minister of Natural Resources, that includes biographical information about Robert Esmay, 1921-1943. This information was obtained in the naming of geographical locations in Saskatchewan after soldiers who died in World War II. 3 p.

Copy of the Department of Natural Resource application form for the naming of a Saskatchewan geographical location after a serviceman who died in World War II: Philip Harper, 1917-1944. 1 p.