Article on the Land Titles Building in Regina published in the Regina Sun, June 15, 1997. Article includes sketch of building by William Argan.

Item is a photocopy of a map showing the railways, trails, and telegraph lines used in the Riel Rebellion of 1885 for the districts of Alberta, Saskatchewan, Keewatin, Assiniboia, and Manitoba, along with parts of Montana and North Dakota. Along top edge of sheet are illustrations of: Qu'Appelle Valley; Sir John A. MacDonald; and Medicine Hat (showing bridge crossing over South Saskatchewan River); along bottom edge of sheet are illustrations of: Kopiassiswean (alternately known as Koriassiswean or Bird Skin) based on photograph taken near Calgary in 1884; Major General Sir Frederick Dobson Middleton; crossed rifles with bayonets; "Savage Indian Warfare" - a depiction of a First Nations' warrior standing over a prone figure with a raised arm; Louis Riel; crossed tomahawk and Indian pipe; and Ne-Raip-A-Shaw.

Produced for the 1949 Hudson's Bay Company calendar, item is an illustration depicting the building of Fort Yukon between 1847 and 1848.

Item is a reproduction of an image originally created about 1942, as an illustration for the 1944 Hudson's Bay Company calendar that shows an 1828 view of the Hudson's Bay Company's chief trader Archibald McDonald (1790-1853) and his party descending rapids on the Fraser River in an area above the present town of Yale, B.C. 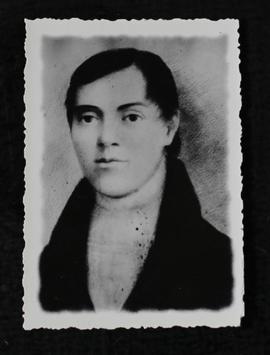 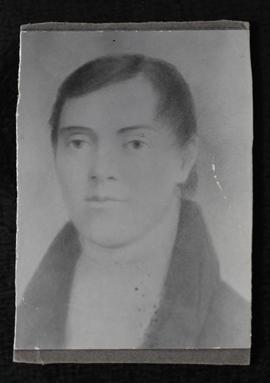 Item is a reproduction of an pencil portrait of Cuthbert James Grant.

File part consists of a blank Saskatchewan Archives' questionnaire pertaining to local government, and a picture of a stone house (built in 1908).