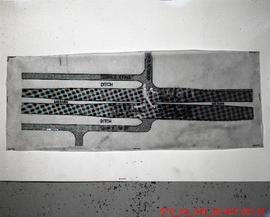 Item is an illustration showing a highway layout with Gordon Road and two service roads identified.

Crayon Sketch of an Indian, "Aimiceese"

Item is a framed photographic reproduction of a crayon sketch of Little Bear (Aimiceese) by John R. Perry.

Hydrograph depicting the flow of the South Saskatchewan River at Saskatoon in cubic feet per second, as compiled by the Office of the Engineer for the City of Saskatoon between May, 1911 and September, 1932.

This fonds consists of records created, accumulated and used from 1949 to 1961 by the secretary of the Saskatchewan Peace Council.

No series were identified within the fonds.

Programme for the Saskatchewan Sports Hall of Fame Special Installation Dinner on September 13, 1979 at the Hotel Saskatchewan in Regina. Includes biographical sketches of inductees Bill Clarke and George Reed and a list of all individuals and teams inducted into the Hall of Fame since 1966.

September 13, 1979 (Land Titles Edition) of the Heritage Gazette, published by the Administration Centre for Sport, Culture and Recreation. The publication contains articles relating to the Land Titles Building on Victoria Avenue in Regina; a brief history of Saskatchewan's Land Registration System; and biographical information on Bill Clarke and George Reed.

Copy of drawing by J. McAnsh of the Land Titles Building in Regina issued by Saskatchewan Culture and Youth to commemorate the dedication of the Province of Saskatchewan's First Heritage Building on September 13, 1979.

Sketch of Regina, District of Assiniboia

Item is a photo-reproduction of a sketch of Regina from a time when it was part of the District of Assiniboia.

Sketches of buildings in Regina, Saskatchewan by Frank Kaszas

Sketches of the Saskatchewan Legislative Building and the Old City Hall in Regina, Saskatchewan by Frank Kaszas. The sketches are on aluminum or stainless steel.

The following biographical information was included with the sketches: Frank Kaszas is a Saskatchewan artist, who is well recognized for his drawings and paintings. He paints all mediums. He received his basic training in Hungary. His work has been shown at the McKenzie Art Gallery in connections with CKCK Art Show in 1976, 1982 and 1986: at the Dunlop Art Gallery and Gallery on the Roof. His paintings and drawings are in many private and corporate collections across Canada.