The fonds was arranged into four series: Churches of Christ; Radville / Western Christian College; Graphic Items; and Board of Directors.

The types of records in this series include: newspapers and periodicals; published works; ledger, minute and attendance books; photographs; a photo album; fabric preaching charts; an audio compact disc; DVDs; a VHS cassette; and CD-ROMS.

This series consists of operational and administrative records created, accumulated and used by Radville Christian College (1945-1957) and its successor, Western Christian College (1957-2012). The series also consists of records related to the school's student government, its alumni association and women's service club. A small volume of records related to the summer and winter bible schools held at Radville, Ogema and Minton in the 1930s and 1940s is also included in the series. Additionally, a small volume of records created and accumulated by Lillian Torkelson, a long-time Radville/Western teacher, principal and alumni association chairperson, is included in the series.

Attendees of a summer vacation bible school hosted by the Radville Church of Christ. See labelled reproductions, stored with photographs, for identification of attendees.

Attendees of a summer bible school hosted by the Radville Church of Christ. 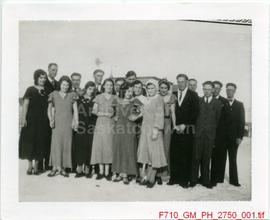 Attendees of the winter bible school, hosted by the Ogema Church of Christ, held between December 1934 and February 1935. 2 copies. 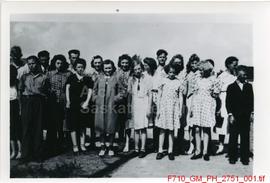 Students of the summer bible school, hosted by the Radville Church of Christ. See oversize scrapbook for a partial list of student names.