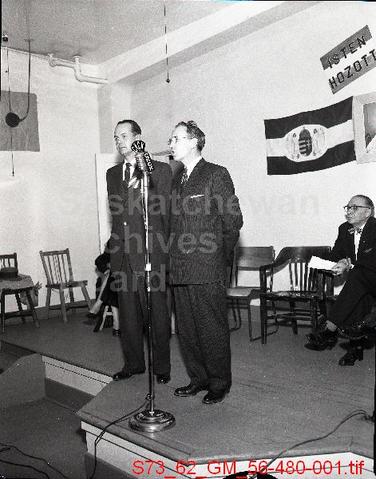 (01) Premier T.C Douglas extends a welcome on behalf of the province to the first group of Hungarian refugees to arrive in the city. His remarks are interpreted by Mr. Paul Trebas. Clayton Hotel.

(02) Hungarian Refugees, Clayton Hotel. Mr. John Lilks still clutching the Hungarian flag which the refugees made aboard ship, sits down with his wife Louise to be registered.

(03) A former Hungarian high school teacher is interviewed by an interpreter while being registered. He is accompanied by his two children.

(04) Behind the scenes, Mr. A.R. Mackie of Regina Civil Defense assisted by Red Cross volunteers and others, tackle the job of finding accomodation for the first Hungarian refugees to arrive in the city. The refugees were temporarily taken care of at the Clayton Hotel in Regina where this picture was taken.

(05) Victor Korompry, a Hungarian mining engineer is interviewed upon his arrival December 21st in Regina. His 8 year old son, already wearing a western gun belt, stands by his side. Photographed at the Clayton Hotel during registration of refugees.

Some of these records are subject to access restrictions. Please consult reference archivist for assistance