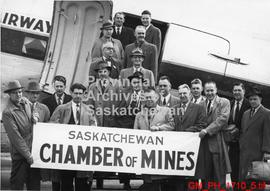 On April 8, 1950, the Department of Natural Resources and Industrial Development became known as the Department of Natural Resources. The department's administrative officers included a minister, a deputy minister, an assistant/associate deputy minister and directors at the branch/division level. Other departmental personnel included surveyors, conservation officers, engineers, and controllers along with administrative staff. The department's head office was located in Regina with a second office in Prince Albert. Field staff were primarily stationed in northern Saskatchewan communities such as La Ronge, Uranium City, Cumberland House and Stony Rapids.

Throughout its existence, the department's organizational structure was based on its primary areas of responsibility as follows: forestry; fisheries; wildlife; parks; lands; the Museum of Natural History; conservation education; construction; surveys; communications and northern administration. Administrative changes included branch name changes and branch amalgamation. The department underwent a major reorganization effective April 1, 1964, when the functions of the department were reorganized into three major sectors: Resource; Recreation; and Northern Affairs.

During its existence, the department was assigned several responsibilities additional to its core functions. The department maintained a Mineral Resources Branch from its inception until April 1, 1953, when the branch became the newly created Department of Mineral Resources. The department became responsible for administering the province's historic sites program around 1953 and, with the exception of two years in the late 1950s, retained responsibility for it until 1973. The Indian and Metis Branch was established on April 1, 1965 to plan, coordinate and implement training and job placement programs for Indian and Metis people.

The Conservation Education Branch was established in the Department of Natural Resources during the 1952/53 fiscal year to streamline the department's public awareness activities. The new branch was created through an amalgamation of existing units, as follows: the Museum of Natural History, the Photographic Unit, the School Conservation Education lecture tour, and the Northern News radio program operating out of Prince Albert.

Headed by a director, the Conservation Education Branch originally consisted of three sections: Information and Education; Photographic; and Provincial Museum of Natural History. The Information and Education section was staffed by a senior information writer and a conservation officer, both based in Prince Albert. They were responsible for providing conservation education in schools; producing the Northern News radio program on CKBI; publishing a departmental newsletter; responding to information requests; creating and distributing various publications; and assisting the Bureau of Publications with news releases. The Photographic Section was responsible for producing images in various formats for documentary, educational and publicity purposes. The Museum of Natural History in Regina was responsible for acquiring and displaying specimens and encouraging public interest in zoology, botany, archaeology, paleontology and geology.

The Museum Section was elevated to full branch status during the 1953/54 fiscal year in order to allow the Conservation Education Branch to focus on its primary purpose, which was the preparation and distribution of information about the department's conservation programs. However the museum returned to the branch within the year.

During the 1960/61 fiscal year, the Conservation Branch of the Department of Natural Resources was reorganized into the Parks and Conservation Branch to accommodate the parks functions formerly performed by the Parks Branch of the Department of Travel and Information. Headed by a director who reported to the assistant deputy minister, the branch originally consisted of three divisions: the Park Planning Division; the Conservation Information Service; and the Saskatchewan Museum of Natural History.

The Park Planning Division was responsible for the planning of provincial parks, historic sites, Trans-Canada Highway camp and picnic sites, provincial highway campgrounds and rest sites. The division also acquired land for park development, maintained records of the disposition of land belonging to the department and administered the regional parks assistance program.

The Conservation Information Service was responsible for providing information and education services to departmental staff and the general public. The Service produced press releases, magazine articles and radio and television programs; maintained collections of photographs, slides, and moving images; erected exhibits; prepared and distributed publications; and answered requests for information.

The Regional Parks Division was added to the branch during the 1963/64 fiscal year to provide facility and layout design assistance.

On April 1, 1964, the Parks and Conservation Branch was restructured as part of a larger reorganization whereby the functions of the department were reorganized into three major sectors - Resource Programs, Recreational Programs and Northern Programs. The parks functions were transferred to several newly-created branches in the Resource Programs Sector while the Conservation Information Service became an independent branch outside of the major sectors called the Conservation Information Branch.

The Conservation Information Branch was established in the Department of Natural Resources during the 1964/65 fiscal year. Led by a director who reported directly to the deputy minister, the branch's original responsibilities included: preparing and distributing publications, including provincial park brochures and fish and game guides; preparing and distributing news releases and feature articles to the news media; producing television and radio programs, including "Northern News", a radio broadcast from Prince Albert to residents of northern areas six days a week; acquiring and lending audio-visual materials; conducting advertising campaigns; answering requests for information; and preparing and editing the departmental newsletter.

One of the branch's major publications was "The Resource Reader", which consisted of loose information sheets designed to be collected in a binder. It was distributed to field staff, students, teachers and the general public. The major subject areas covered included conservation, wildlife, fish, birds, reptiles, forestry, history and folklore, parks and recreation. The branch also produced "The Resource Report", a weekly compilation of news releases on departmental activities distributed to departmental personnel, the media and various interest groups.

During the 1968/69 fiscal year, the branch began operating a telephone information line in Regina. The "Resource Phone" supplied current information on hunting, fishing, skiing and park reports in season. Additional lines were later set up in Prince Albert and Saskatoon. During the 1970/71 fiscal year, a comprehensive manual governing the implementation of the Department's standard signing system was produced by the branch to accompany the signs that were installed throughout the province.

In 1972, The Conservation Information Branch was reorganized into the Extension Services Branch.

In 1972, the Department of Natural Resources underwent a major reorganization. The Conservation Information Branch; the Museum of Natural History; and the Hunter Safety Program were amalgamated to form the new Extension Services Branch. The branch's primary mandate was to educate the public on the management and utilization of Saskatchewan's renewable resources including fish, timber, and wildlife. The branch was managed by a director, who reported to the associate deputy minister.

The Hunter Safety Program, formerly under the jurisdiction of the department's Wildlife Branch, offered training on the proper handling of firearms and ammunition, safe hunting practices, game identification and field survival. The program, taught by volunteer instructors and administered with the co-operation of the Saskatchewan Wildlife Federation, was offered to schools, community groups, armed forced cadet leagues and other interested parties. The program's supervisors were located in Regina and Prince Albert.

In 1973, the Hunter Safety Program was renamed the Firearm Safety Program. The Extension Services Branch became responsible for standardizing the department's visual identity through the design, planning and production of displays, printed materials, signs, promotional items and advertising. The "Northern News" radio program was transferred to the newly established Department of Northern Saskatchewan and was produced from La Ronge. On April 1, 1974, the Department of Natural Resources and the Tourist Branch of the Department of Industry and Commerce were amalgamated to form the Department of Tourism and Renewable Resources. The Extension Services Branch continued to operate in the new department with a modified structure and mandate.

This government series consists of records created, accumulated and used by personnel responsible for the conservation information and education functions in the Department of Natural Resources. The types of records included are: news releases, radio scripts for "Northern News" (1947-1960), correspondence, publications and photographs.

This government series also includes records created by personnel responsible for publicity in the Department of Natural Resources and Industrial Development in the late 1940s and early 1950s. The records were created in consultation with the Northern Branch of the Bureau of Publications. The types of records included are newspaper clippings, news releases, and photographs.

Most of the records are in good physical condition. Some of the photographs are curled and/or torn on the edges.

Use, publication and/or reproduction are subject to Crown Copyright. Please consult reference archivist for assistance.

SAFA 628 consists of a series description and file listings of the textual records and the photographs.

Conservation practices in place at the time of processing were applied to the records in this series.
Some of the original textual records were mouldy. They were destroyed after being microfilmed.
Photographs were placed in plastic sleeves and acid-free envelopes.