Images taken at the Back to the Old Crossing event presented by the Regina and District Old Timers' Association, Inc. The event was part of the City of Regina's 100th anniversary celebrations. Images include Jack Drew, the reeve of the Rural Municipality of Sherwood, unveiling the cairn re-dedicated to the early settlers who arrived in the Wascana district on May 24, 1882; the old timers' picnic; the dance at the Red Barn at Sherwood Forest; the Wascana Church and cemetery plaque erected in 1967; and old headstones in Wascana Cemetery. 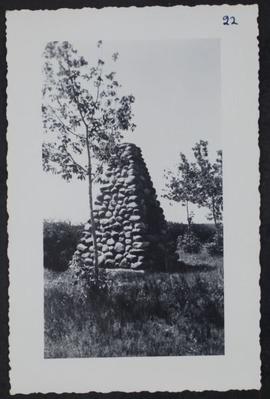 Item is an image of a stone memorial structure at Batoche, Saskatchewan.

Publication produced for the Centennial Celebration at Fort St. James on September 17, 1928 and for the unveiling of a tablet at Simpson Pass on the High Road from Banff to Windermere, B.C. on September 20, 1928. Both events were in honour of Sir George Simpson.

Scrapbook of newspaper articles in the series "Crossing the Prairies Eighty Years Ago", which describe a trip from Fort Garry to Edmonton made by Sir George Simpson, Governor of the Hudson's Bay Company. Source and date unknown.

Letter from D.H. McDonald of Regina, Saskatchewan to the Legislative Librarian dated March 15, 1924 concerning an engraving of a painting of Sir George Simpson.

Item is an image showing the historical marker at the Blackfoot Crossing cairn - erected 1927 after it was designated a historical site in 1925 in honour of the signing of Treaty 7 between the Dominion of Canada government and First Nations such as the Tsuut’ina, Blood (Kaina/Kainah)

Images of men and women, including George Taylor of Swift Current, Saskatchewan, gathered around the cairn located on the former site of Wilhelmina School, in the Webb, Saskatchewan district. A Canadian flag is draped over the cairn in one image. The wording on the cairn cannot be read in the images.

George Taylor was a pioneer of the Wilhelmina School District and served as a trustee on the board.

Photocopied photograph and notes pertaining to a cairn, erected on June 20, 1980, marking the location of Foote School District No. 2047, which existed between 1908 and 1962.

Dr. Gordon Bicum and cairn erected in his memory

Head and shoulders portrait of Dr. Gordon Bicum in his uniform as a medical officer in the Royal Canadian Air Force and images of the cairn erected in 1967 by the Saskatchewan Department of Natural Resources in his memory, located west of Elstow on Highway 16.

The wording on the cairn is as follows: Erected June 25, 1967, in honour of Gordon Bicum, medical doctor, in appreciation of his 43 years faithful service to Elstow and surrounding communities. Dr. Bicum was born in Kent County, Ontario, in 1894. He graduated in 1922 from Queen's University, Kingston, as a gold medalist. He served in the Medical Corps during the First World War and as a medical officer with the Royal Canadian Air Force from 1941-1945. He practiced in Elstow from 1924 till his death June 24, 1967. He was respected and loved by all.