Copy of letter from A. R. Turner, Provincial Archivist, to A. I. Bereskin, Controller of Surveys, Department of Natural Resources, regarding information about James H. Dickson and his history in Saskatchewan, dated June 22, 1965. Date copied June 22, 1965.

One page of handwritten notes regarding the history of black Canadians in Saskatchewan. Creator of notes unknown, [after 1949].

Articles from various sources regarding immigration and homesteading by black persons in Saskatchewan and Alberta. [after 1946-1972]. Some copies included, date copied unknown.

Correspondence between Allan R. Turner, Provincial Archivist, Regina, Saskatchewan, and Mr. Robin W. Winks, Department of History, Yale University, New Haven, Connecticut, regarding the history of black Canadians in Saskatchewan, with particular interest in a settlement near Maidstone, dated July-October, 1959. Letters sent from Turner are copies of originals, copied the same date as the letters were written.

Item is an image of John Ware and some of his family: from left to right, Mrs. Ware, son Bob and daughter Netti.

Maggie and William Ellis, Frazer and Ora Jamerson with friends

Maggie and William Ellis, Frazer and Ora Jamerson with friends Mrs. Allen from Markley and Mrs. Smith. Standing beside a truck in Provost, Alberta.

Marie Weisbrodt Mayes and her children 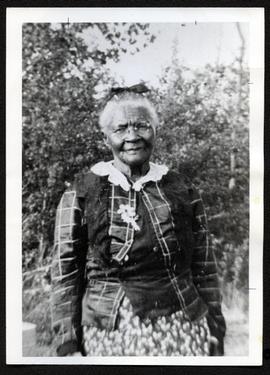 Mattie Mayes, who arrived in the Eldon district in 1910

Mattie Mayes, who arrived in the Eldon district, north of Big Gully, in 1910 with 40 members of her family.