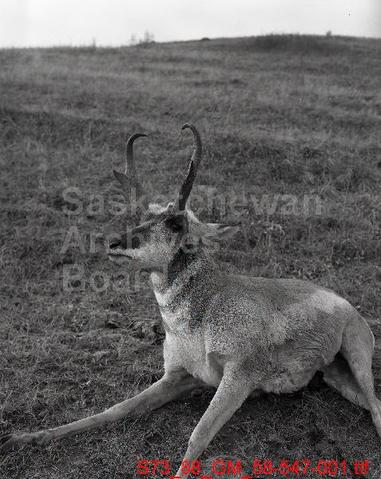 04: Mr. Everett Olson, left, from Aquadell, Saskatchewan, and Bob Breen from Saskatoon display the antelope they bagged on the opening day of the antelope season.

05: Mr. Fred Heebner of Vanguard, Saskatchewan displays the large antelope he bagged on the opening day of the antelope season.

08: Conservation Officer Rich Lafs [sp?] checks Mr. Bob Breen's license to see if everything is in order and that the animal is properly tagged.

10: A group of unidentified antelope hunters from scattered parts of the province rest up at dinner time before starting off for the afternoon shoot.