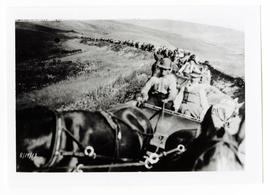 A large group of Americans coming into Saskatchewan

Item is an image of a large group of Americans coming into Saskatchewan. 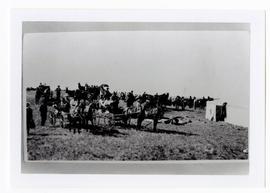 Item is an image of a large group of Americans who have just arrived in the Raymore-Strasbourg district.

Copy of letter from A. R. Turner, Provincial Archivist, to A. I. Bereskin, Controller of Surveys, Department of Natural Resources, regarding information about James H. Dickson and his history in Saskatchewan, dated June 22, 1965. Date copied June 22, 1965.

One page of handwritten notes regarding the history of black Canadians in Saskatchewan. Creator of notes unknown, [after 1949].

Articles from various sources regarding immigration and homesteading by black persons in Saskatchewan and Alberta. [after 1946-1972]. Some copies included, date copied unknown.

Correspondence between Allan R. Turner, Provincial Archivist, Regina, Saskatchewan, and Mr. Robin W. Winks, Department of History, Yale University, New Haven, Connecticut, regarding the history of black Canadians in Saskatchewan, with particular interest in a settlement near Maidstone, dated July-October, 1959. Letters sent from Turner are copies of originals, copied the same date as the letters were written.

Emerging from the Shadows: The Dean Family in America and Canada, 1673-2003

Esslinger/Eslinger Families: Tracing the 'Family Roots' from Europe to Canada

Item is a history of the settlement in the Langenburg area of Saskatchewan by the Jakob, Karl and Michael Esslinger families, who immigrated to Canada from Germany, via the United States, in 1888. Item is written by Joyce Petznik (née Esslinger).. 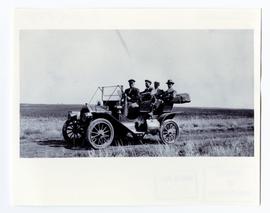 Four land seekers from the U.S.A. seated in a McLaughlin-Buick No. 11

Item is an image showing four land seekers from the United States seated in a McLaughlin-Buick No. 11.

Item is a history of six generations of the Olaf and Caroline Pederson family from their beginnings in Norway to their life in Canada and the United States. Compiled by Jean E. Peterson.

Items are images showing views of large groups of Americans moving by horse and buggy into the Raymore-Strasbourg district.

Item component is an article by Paul F. Sharp that appears in volume 7, issue 3 of Saskatchewan History from page 81 to 99. 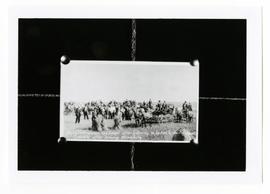 Item is a view of a group of people in a field. They are probably Americans who have come to settle in the Strasbourg-Raymore district.